There are two things I’ve been wanting to try lately, one is the SIG Sauer P320 and the other is a pistol mounted red dot sight (RDS).  The P320 is quite the popular pistol, having recently gaining notoriety upon being chosen by the US Army to replace the Beretta 92, beating out Glock in the finals.  Pistol mounted red dots have steadily been working their way from competition circles to carry pistols.  And then back again with matches now offering a Carry Optic division.  The prevalence of each has me wanting to make sure I’m not missing something.

There are no shortage of striker fired pistols today.  Let’s see, we’ve got H&K, Glock, S&W, Springfield, Remington, Beretta, Walther, FN, Canik, Ruger, and a bunch more.  SIG also came to the party with the P320 rather late, introducing it at the 2014 SHOT Show.  If you’re coming late to an already flooded market you better bring something special.  Even at that, Glock and S&W are so imbedded in law enforcement and competition circles that it would be a real uphill battle. 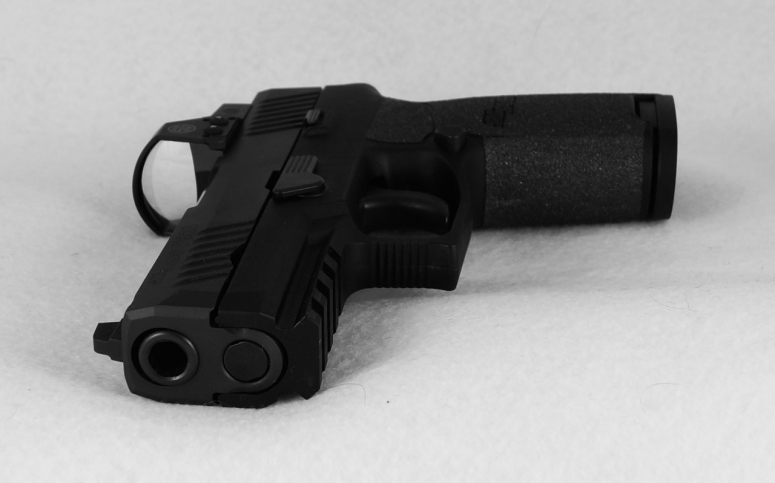 SIG took into consideration how people like to use a single platform in a wide variety of applications.  You have people who own a Glock 17 (full size), 19 (compact), and 26 (sub compact) that fill varying roles based on what’s needed at the time.  But they typically only ever carry one at a time.  Shooters also usually like to have their triggers feel the same across their guns, which gets expensive if every model requires a trigger job.  Another example would be people who cut down the grip on their full size Glock 17 so they can run compact Glock 19 magazines.

The fire control internals come on a serialized chassis that is removable and can be dropped into frames of varying sizes and models.  The frames are relatively inexpensive with an MSRP of $44.  Each model is available in small, medium, or large depending on your hand size.  The slide sizes are also interchangeable, which means you can put together just about any combination your heart desires and all with the same trigger setup.  And the swap couldn’t be easier, with the takedown lever the only “pin” being removed.

The trigger weight came in at 6 pounds 8 ounces, right at SIG’s advertised weight.  SIG says they zero the guns but both of mine came with the sights and red dot having drastically different points of aim.

Initial live fire was a breeze.  In my first session I put 50 rounds of Winchester NATO 124 grain and 50 rounds of Aguila 115 grain through it.  It chewed through them all without a hiccup.  At 7 yards with the 124 grain round the point of impact was 3 inches below my point of aim, using sight image #2 pictured below.  With 115 grain the group raised significantly and was hitting right behind the front sight tritium dot.  SIG calls that a “combat sight picture” and is represented below as number 3.  Not my preferred setup but at least it was closer than the 124 grain.

This was my first time shooting with a pistol mounted red dot sight (RDS).  Because of how the RDS is mounted the iron sights are setup as an absolute cowitness, pictured below.  This means when everything is perfectly lined up the red dot sits right on top the tritium dot.

There are a couple big advantages to this setup. Red dots typically have a learning curve as people try to “find the dot”.  Depending on how a RDS is mounted it may sit high above the pistol sights, which is basically like mounting tall sights on your gun.  What causes people problems is they have to learn how to compensate for the extra height.  This causes them to wiggle the pistol around trying to find where the dot is.  With cowitnessed iron sights I found that on pressing out to the target from a high-ready I could use my front sight just like I always do, and drop it into the rear sight notch.  As the front sight came down into the rear notch the red dot would appear and I was blasting.

Another advantage to cowitnessed sights is should your red dot break, the battery die, whatever, you have your iron sights right there to take over with.  If you’re going to use a RDS on a carry gun back up sights should be mandatory.

When I very first saw the P320 I noticed what appeared to be quite a high bore axis.  Somewhere along the line I picked up the idea that a high bore axis meant increased muzzle flip.  I held that idea for quite a while, but after finding my P226 so effortless to shoot I had to challenge that belief.  Like my P226 I found the P320 to be easy to shoot under rapid fire.  It was controllable with minimal recoil for a polymer pistol, and that was with the stock grip.  With a set of granulate TALON Grips now installed it should be even easier.

Through further testing I put several hundred more rounds down the barrel, including 100 rounds of my carry ammo, Federal HST 124 grain.  I haven’t cleaned or oiled it since I first bought it and it continues to run like a champ, never giving me any type of malfunction.  So far I’ve tried 6 different brands of ammo of varying power factors and it likes them all.

What’s the bad?  The P320 has a few issues for me.  During my last range session I stopped at 250 rounds because the gun was too hot to keep shooting.  Specifically the takedown lever was burning the heck out of my support hand thumb.  I was also catching some burn on my strong hand trigger finger when it was straight along the frame, this was also from the takedown lever.  Due to the design the gun transfers the heat from the barrel to the other components, even down to the trigger.  For extended or high round count range sessions this is a killer.

One of the first things I noticed after buying the P320 was how squishy the trigger pull felt after the pre-travel.  When I pull the trigger it feels like the chassis flexes in the frame, not the “crisp” trigger that SIG describes.  I’m not sure how else to explain it as I’ve never felt this in a pistol before, but it’s not a good sensation to me.  My P226 came with a lot of creep but not like this.  I like precision pistol shooting and all that squish/flex doesn’t help trigger control/accuracy.

A personal issue for me is the grip size.  The P320 comes standard with a medium grip, which gives good reach to the trigger and a nice comfortable size.  The problem is I can’t get the support hand engagement I’m looking for.  I could switch to a large frame but then my reach to the trigger increases and that brings its own problems.

The P320 is a shooter, there’s no doubt about that.  Mine has been accurate and reliable, and for that I commend SIG.  But I like to shoot my guns a lot and have a very discerning trigger finger.  The grip I could work around and a trigger job could be done but the heat transfer was the nail in the proverbial coffin.  I do think the platform is interesting and I like the innovation involved.  Maybe in the future I’ll check out a P320 X-Five or X-Carry and see how their premium line stands up.

Update:  Soon after posting this review the below video came out calling into question the safety of the P320.  I felt it appropriate to include here.